Your Phone has been verified 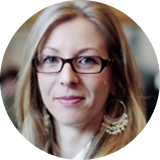 Lisa Loseto is a Research Scientist at Fisheries and Oceans Canada in Winnipeg with the Arctic Aquatic Research Division. Lisa’s research focuses on characterizing beluga health as means to understand ecosystem health in the Western Canadian Arctic. She combines food web biotracers and habitat modeling to gain insight into predator-prey interactions and ecosystem energetics. Her research on beluga diet and habitat use combines Western science and traditional ecological knowledge (TEK). Her research programs are carried out in partnership with communities and co-management boards of the Inuvialuit Settlement Region. She strives to serve all Canadians by providing knowledge and advice to decision makers and by helping to empower the people of the north through scientific knowledge combined with their own knowledge of their ecosystem and home. Lisa obtained a B.Sc. Honours at York University in Toronto, a M.Sc. in toxicology at the University of Ottawa, and a PhD from the University of Manitoba. Lisa’s Post doctoral research on beluga health took a multi-disciplinary approach to examining contaminant and climate stressors. 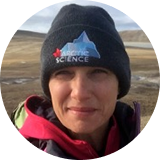 Melissa Lafrenière is a Professor in the Department of Geography and Planning at Queen’s University and is an adjunct at the Cold Regions Research Centre at Wilfred Laurier University. She received her Ph.D. in Earth and Atmospheric Sciences at the University of Alberta (2003). Her research examines the hydrological and biogeochemical response of watersheds in Canada’s cold regions to global change. Her work employs extensive field investigations, laboratory experimentation, and various analytical approaches (optical, elemental, and isotopic) to evaluate how changes in climate and permafrost conditions alter the loads and biogeochemical cycling of elements (e.g., carbon (C), nitrogen (N), metals, and contaminants) in surface waters in alpine and Arctic environments in Canada. Her recent projects are motivated by the need to better understanding the impact of changing permafrost conditions on water resources and water quality in Inuit communities. She has 23 years of field experience in glaciated and permafrost regions in Canada and is co-director of the Cape Bounty Arctic Watershed Observatory (CBAWO) on Melville Island, Nunavut, a long-term integrated watershed research site in the Canadian High Arctic.